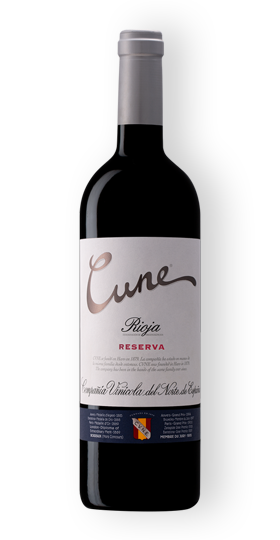 The grapes for the production of Cune Reserva come from the company’s Caballeros, Santo Tomás and Sarnamoros estates, all located in Rioja Alta in the towns of Rodezno, Villalba and Haro.

Alcoholic fermentation takes place at a controlled temperature in 20,000 kg stainless steel tanks where we alternate different types of remontage (traditional and pump), delestage and pigeage.  After fermentation, the wine undergoes heat maceration and remains in the vat for approximately 18 months. Then, after malolactic fermentation, the wine is aged in French oak barrels (partly new) and American barrels. The process continues for 24 months, during which the wine evolves, adopting the characteristic notes of the two types of wood. Following natural clarification, the second phase of ageing and balancing takes place. The wine remains in the bottle in our cellars for a minimum of 12 months before being released on the market.

DOWNLOAD BOTTLE IMAGE DOWNLOAD LABEL IMAGE
“The first wine produced by the company took its name from the initials CVNE. A fortuitous misspelling between the U and the V created the brand. Historically it was known as fourth year or fifth year. In accordance with the wine law passed in 1970, it was renamed "Reserva ”

“Cune Ecológica comes from vines grown in Haro with sustainable agriculture, using traditional practices that respect the environment. Cune Ecológico aims to express the soils of Rioja Alta (Haro and nearby towns, also San Vicente) and the pure aromas and flavours of the grapes used to produce it”
BUY NOW
We use cookies on our website to give you the most relevant experience by remembering your preferences and repeat visits. By clicking “Accept”, you consent to the use of ALL the cookies. Más información
ACEPTARRECHAZARConfigurar
Manage consent